Designers always want to leave their mark. I get it. You want to have something to be remembered by.
This is no different within Google. Android has been significantly improved in recent years. It's finally on par with iOS design. (And it only took a decade and a half!)
But there's a point where designers start redesigning things that weren't broken, and we've hit that point. Moreso, they're actually making things worse.

Exhibit A: Redesigning the dialpad

This new feature provides transcripts when calling businesses, among other features. But they reduced the keypad to a single row that overflows off the screen. Now, choosing a menu prompt above the number 4 requires an additional gesture and cognitive overhead of having to learn a new UI, vs the tried and true traditional keypad arrangement. (The number "1" also comes before "0", which is a different pattern than a normal dialpad.)

Exhibit B: Buttons that change shapes?

Somebody decided it would be fun to make the primary CTA button a rounded square. I fail to see what was wrong with the round buttons they've been using. But hey, a designer's gotta design, right? 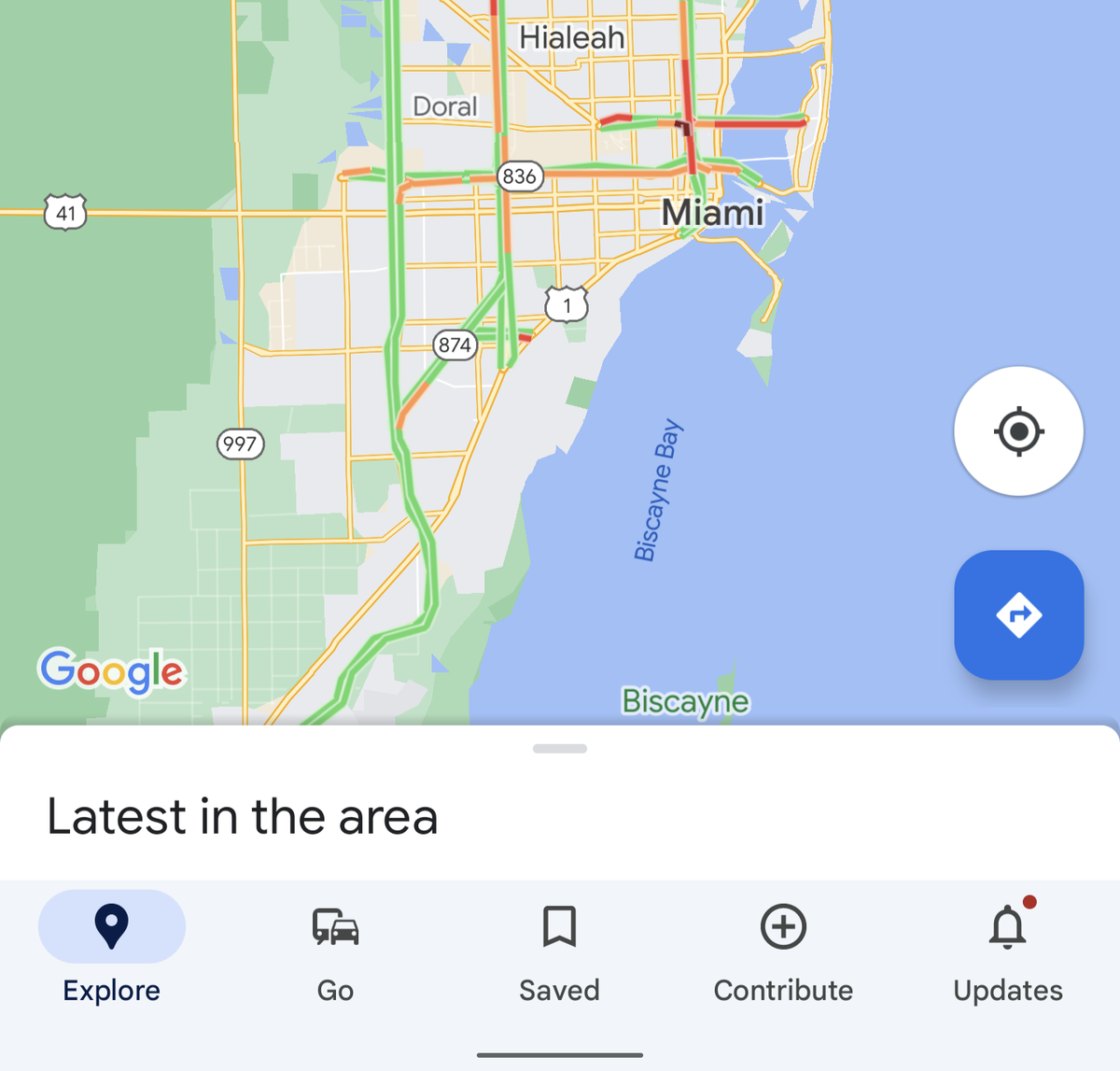 Arguably the biggest annoyance in all of Android 12 is the removal of the option to toggle wifi on and off. It was so elegant. Need to toggle wifi? One swipe, one tap. Done. That's all it took! 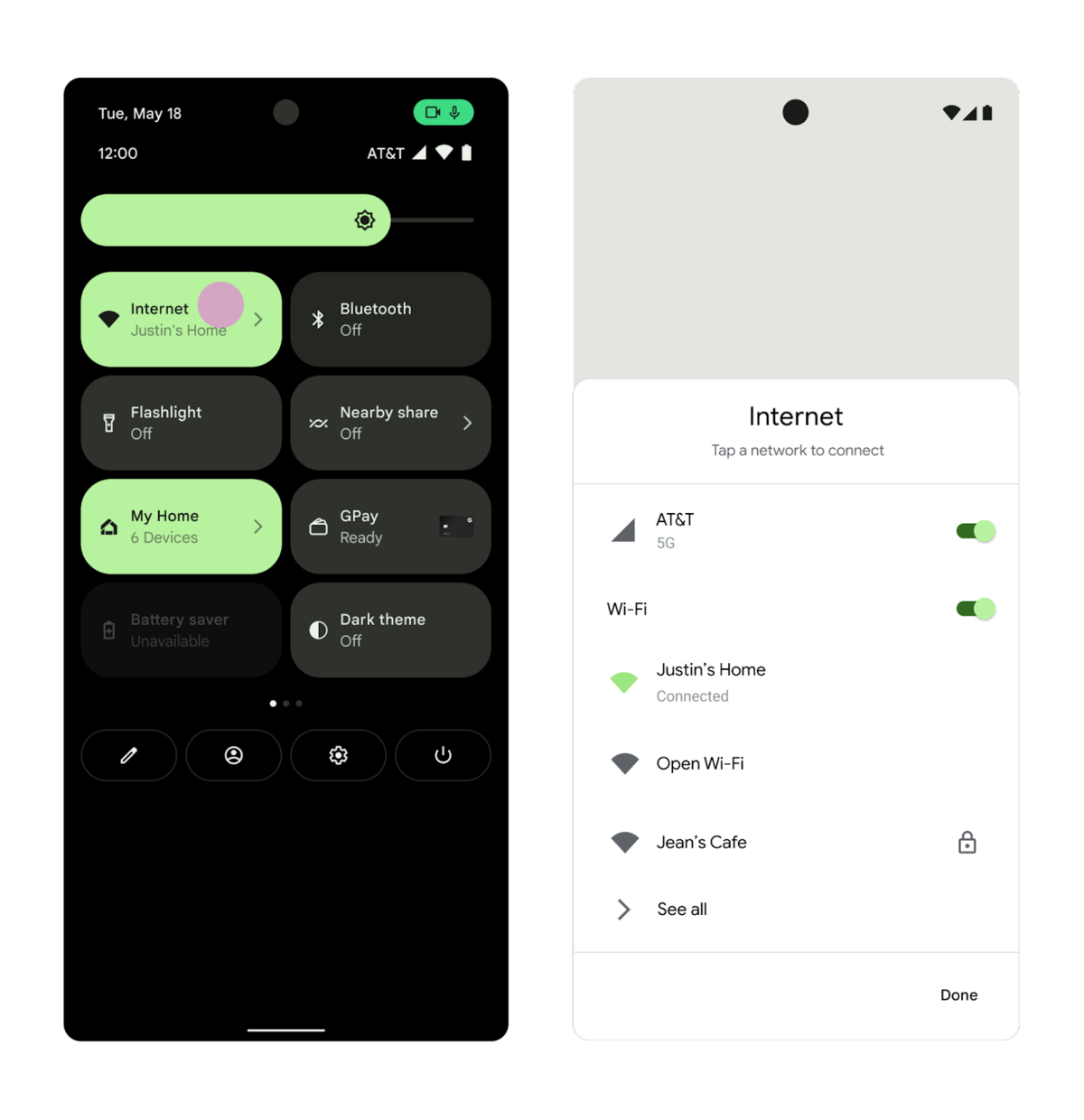 But our great overlords at Google decided they would fix something that wasn't broken and combined it with Cellular data into a new "Internet" tile. So now when your wifi is spotty and you want to turn it off, you must swipe down from top, tap the Internet tile at the top of the screen, then head to the very bottom to toggle wifi, then tap Done. Great, right?

This change has received so much backlash by users that a Google Community Manager had to defend it in the forums, and there's even a post on how to root your phone to bring it back.
This was supposedly done to help you remember to turn wifi back on? Not really sure how this solves anything. Other users tend to agree, and Google has been getting ripped in comments:

"The Internet panel solves nothing, at least not the "problem" you are describing. If you use the internet panel to switch from WiFi to Cellular Data, how does that make it more likely that the user will remember to switch back to WiFi. You've made the experience much more unpleasant to switch between the two that it is probably more unlikely a user will manually switch back to WiFI.Why does Google feel like it has to fix things that are not broken? What used to be easy and intuitive is now difficult. I hate the Internet panel. Adding it to the lock screen will also not help anything. Since when do users want to switch back and forth when their phone is locked?"

"I'd like to see some hard numbers on who wants this change, or what your user study really showed." 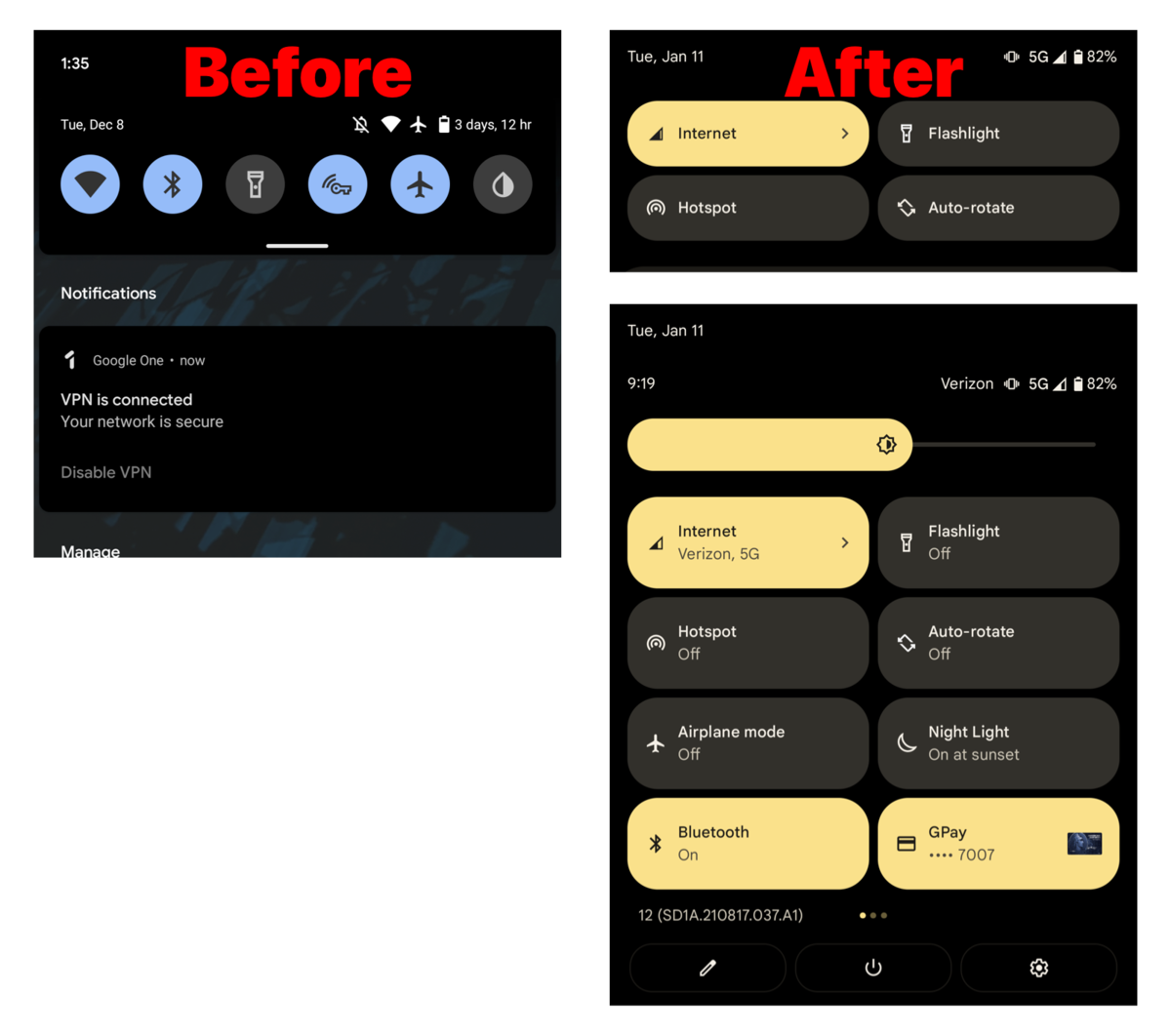 For those not familiar with Android, you can swipe down from the top of the screen to access Quick Settings. Before Android 12, you'd have six customizable options at a single tap. Android 12 reduces this to four options. An additional swipe down reveals four more tiles with extra info nobody really needs.
Google decided to add a subtitle to each tile, with information you don't really need. Color already indicated whether an option was on or off. Now many of the tiles list out whether they're on or off. This seems like a great option, but provides little value to anyone after their first week on Android. I don't need text to tell me my flashlight is off, my hotspot is off, my auto-rotate is off, airplane mode is off, bluetooth is on, and that my night light turns on at sunset.
This screen is now harder to scan, harder to find the options I'm looking for, and requires more swipes to access options.
This was a worthless change that solves no real problems for anyone who uses Android on a frequent basis, which tends to be everyone who has a phone.


Like I said, designers gotta design, but maybe we can find real problems to solve instead of alienating loyal users by changing things that weren't broken just to leave a mark.

Update: After some retweets about this issue, my domain is finally unblocked. (More details at the end of this post.)

Facebook censorship has effectively barred my business from their platform and is materially impacting the livelihood of my customers.

For the past decade, I’ve run an online portfolio business on the side called FolioHD. (You get a subdomain on the platform to host your portfolio, like mine at watilo.foliohd.com.) The entire foliohd.com domain has been banned from Facebook and Instagram because someone shared something that Facebook didn't like.

Now I am personally blocked on Instagram from liking photos or sending DMs. I can’t sign into my company Instagram account. And Facebook has reached into my Page’s support inbox, removed private message between myself and customers, and has blocked my website's integrations to import photos from Facebook's and Instagram's APIs.

App designers are always trying to stay on-trend. The problem is that sometimes these trends tend to take design backwards from a usability perspective.

A few years back when Apple decided to change iOS icons from filled in to outlined (in iOS 7), many believed this to be a step in the wrong direction, as outlined icons increase cognitive load.

The image and quote below are from Aubrey Johnson's analysis of the change:

Take a look at the example above. The red lines indicate areas where cognitive load is occurring. Your brain traces the shapes on the first row an average of twice as much. Your eye scans the outside shape and then scans the inner line to determine if there is value in the “hollow” section.

Forcing users to spend more time to decipher an icon is never a good thing, and unfortunately, many designers have followed this trend "because Apple did it", which is a horrible justification.