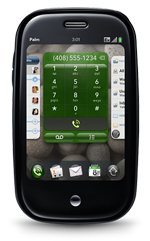 I was one of the first of the public to own a Palm Pre. I got up early and was at the local Sprint store a couple hours before they opened so I was sure to get one. But within a week, I returned it, a little disappointed. It wasn't the first time I returned a phone. I am on my 26th phone now, if that explains anything. It's simple: I don't have much tolerance for mediocre devices. I gave up on the Palm Pre for two main reasons: the sub-par keyboard amd the lack of any decent 3rd party applications.
Having had recent stints with an iPhone 3G S, the HTC Droid Eris, and now the Blackberry Tour, I am missing my Palm Pre more than ever. I just really liked Web OS. It's too bad the keyboard was so terrible, and there were no apps because Palm didn't release their SDK to more than a handful of developers. And back on the hardware front, now with the Palm Pixi, I hear Palm cut back on the stuff under the hood to release a less-than-perfect experience of their new OS - in my opinion, not their best move ever, despite the reports that the Pixi has a better keyboard.
So how long will it take for Palm to come up with something with a little bigger keyboard and powerful hardware that will work on anything other than Sprint? And the bigger question: when will Palm get their act in gear and really start pushing developers to make apps for the Web OS platform? With the way Palm engineered the platform, apps for Web OS should be easier to build than the same apps on either the iPhone or Android platforms, since it doesn't require much in terms of a learning curve. And yet, Palm is significantly trailing the iPhone and Android platforms in terms of available apps.
I'm really hoping Palm has a good reason for taking so long to really release their Web OS SDK. Some might argue that Palm is past the point of being able to compete with app libraries like the iPhone's or Android's. But it's really time they get the thing out there, doing whatever they need to do to get developers to start developing for their platform, even if it takes cash incentives for creating great apps.
I really hope Palm can start pushing forward in both the hardware area and the 3rd party developer market. Web OS is pretty innovative. I just hope Palm can start moving so they can get some significant traction before their lunch gets eaten by somebody else who understands you've got to have it all together to really start selling devices.