A couple days ago, it was discovered that Posterous modifies links that users place on Posterous blogs and adds an affiliate code when the user doesn't provide one. For example, if I link to a product on an e-commerce site and the website I'm linking to has an affiliate program, Posterous will drop in their affiliate code so if you end up purchasing that product, Posterous will take the affiliate cut for the referral. Then TechCrunch picked up the story and the internet has been up in arms ever since.

Unfortunately, it seems like people don't really understand the issue. Here's what Posterous is NOT doing:

Here's what Posterous IS doing:

The only potential problem here is for journalists who are reviewing products or services. The thinking is that, if there is an affiliate link attached, someone is making money if a conversion is made. And that's the moral issue being debated. But since the author of the post isn't making any money off the link, it really doesn't matter.

But to me, it seems like most of the upset people are just mad because Posterous didn't inform them of the change, and has nothing to do with the potential issue I see above. It's because they just feel like they have a right to know. The question I pose to them is...who cares? If doesn't affect users at all. Posterous CEO Sachin Agarwal even said that they had been using VigLink for 4 months before anyone even discovered the deal. And for a site in the Alexa top 500 (in the US), it just goes to show how transparently the service worked. The following comment was left on the original post about the discovery of the partnership by "Electronic Foodie":

"Will Posterous be disclosing how much it made from its experiment with Viglink? Where will this money be directed towards? We believe the money Posterous made with Viglink, up until the time it officially notified its users of Viglink, should be donated to charitable organizations voted upon by its users."

Umm.....WHY? This might just be the dumbest thing I've ever heard. Contrary to what you believe (and what the government may have told you), Electronic Foodie, nobody (even Posterous) owes you anything. Sure, it may have been nice to know about this change, but I'm not shareholder and neither are you, so if Posterous wants to keep this info on the DL for whatever reason, they have the right to do so.

So what do I think? Posterous is a free service, has to make money somehow, and is trying to come up with ways to monetize that DON'T involve sucky banner ads. Good on them for being creative. And kudos to VigLink and other companies who are thinking outside the box to help monetize the web in unobtrusive ways. Hello, web 3.0.

Tabby 2 is a new and improved, fully customizable version of the original Tabby theme. You can now edit text, background and header background (among others), and even drop in your own header image if you don't like the soft light background that comes standard with the theme, all without editing any html! Get it at themes.posterous.com. 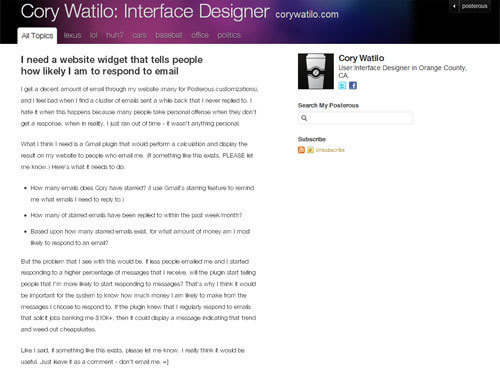