In recent years (really, the post-Steve Jobs era), the designers on iOS have become lax. In an effort to add new features or "improve" design, they have crippled usability and crammed buttons into places that shouldn't even be places. And without someone like Steve Jobs to send them back to the drawing board, these train wrecks now make it into production. A few examples:

"Back to App" button 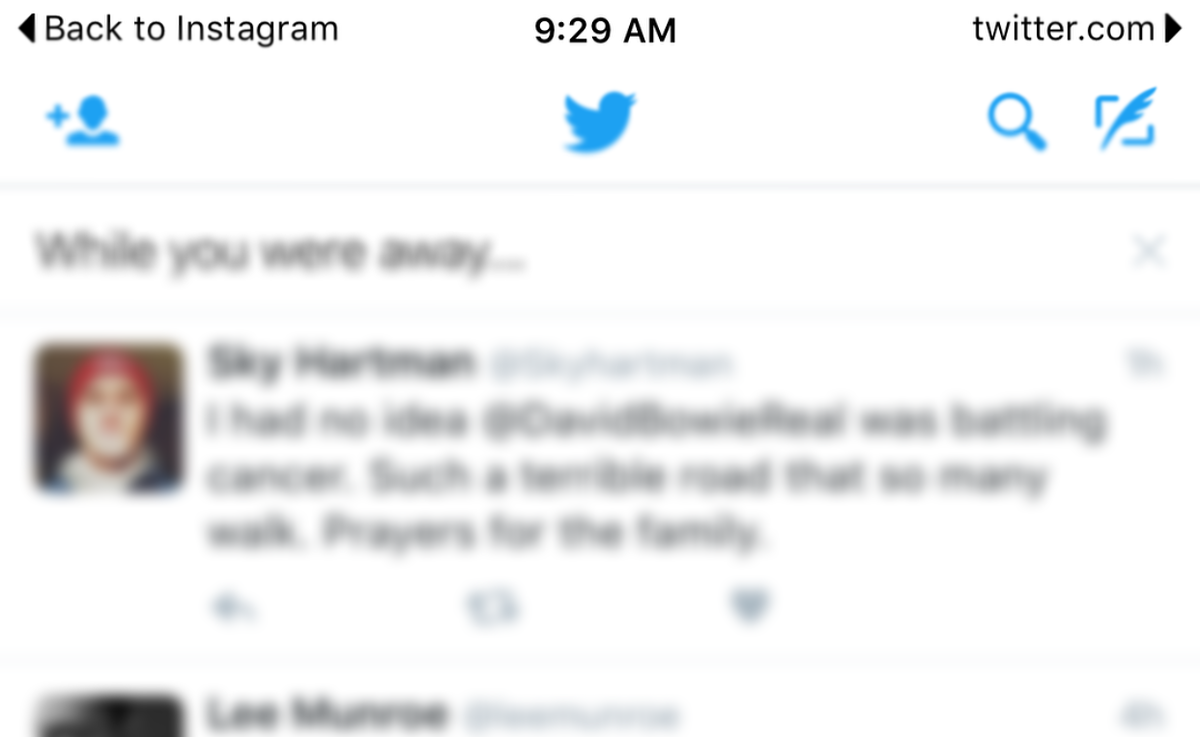 When clicking a link that takes you to another app, iOS now crams a "Back to ____" link in the status bar. There are several problem with this:

And now they're a "Forward to ____" button?! Great, now I can't check my battery or diagnose why my sound isn't playing. ("Am I connected to a bluetooth device somewhere?")

Google solved this adequately within their own suite of apps, like in Chrome, by overriding the app's Back button with a button that would return you to the Google app where you came from - a very elegant solution.

Surprised? I sure hope not.

It continues to astound me that websites with a large user base and trajectory seem to be a good enough reason to go public. Many of these sites are the fad of the month but happen to catch mainstream hype at just the right time.

Let me say this: Because you write software and attain a large audience and good traction and get decent mainstream press, these reasons alone are not a good enough to go public.

There's a catch-22 in the internet business: Salaries are often subsidized with equity. This traditionally works well with traditional, brick and mortar companies. We're talking about companies that build hotels, chains like Starbucks, or the company that makes the straws that we all use in our Starbucks drinks. But it seems as if internet companies now feel pressured to cash out or go public because of the amount of options they've given away to their early hires, and the number of people relying on them who expect an exponential return. Also layer in the fact that VC firms expect to turn theoretical value on paper into real, cold hard cash in a relatively short period of time. As a result, you're left with a whole slew of companies who aren't ready to be scrutinized in the public financial market.

The old criteria for an IPO candidate used to be businesses with remarkable traction and revenue trajectory. But when the internet came along, everything changed. Suddenly, companies could see exponential growth almost instantly. (Come on, that's pretty easy. When you go from 0 to X...) But as we've seen, that doesn't necessarily ever last. Anybody remember the .com bubble? It almost seems like user adoption maybe isn't the best metric for long-term financial success. Crazy!

For those who don't remember, Twitter didn't start out as a startup with hopes of ever going public. In fact, the founders of Twitter, in 2006 at the time it was created, worked at a podcasting website, Odeo, and things were headed downhill. They realized they needed to reinvent themselves and ended up creating the concept that Twitter is today.

When it comes down to it, Twitter is a marketing site where its audience (users) is sold to advertisers. Let me say it differently: the users are the product and the advertisers are Twitter's customers. Unfortunately, that's nothing unique to Twitter, nor to many internet startups and their stocks that have flatlined. Twitter hasn't built a railroad, nor a coffee chain like Starbucks, nor those straws that we sip out of every morning on our way to work. How is Twitter different than Facebook, from a monetary perspective? Not much, except that Facebook has done it better. Twitter has built a website that millions of us visit on a daily basis (and yes, I use it all the time) but when it comes to financial investors who don't understand crap about the internet, they're looking at a different metric. "Did you hit the growth potential we expected? Did you hit the advertising dollar figure we were looking for?" If not, you're screwed.

"But Cory, what about company X that was super popular?" Let's take a look.

Are we sensing a trend?

Oh, one more for you, ladies and gentlemen. Yelp:

In Yelp's case in particular, when their user growth and revenue flatlined, they had to find other ways to keep the charts looking like hockey sticks (up and to the right) and that's when it came out that sales reps were writing negative reviews about businesses, then calling them to upsell them to a plan where they could manage their reviews. How's that for a business model?

So for those of you who put money into Twitter, or Yelp, or Groupon, just because of their upward growth... did you really think they would become the next Google? Or Apple?

Put your money into a company like Salesforce, a company that continues to spread its tentacles into the hearts of businesses across the world. Put your money in Tesla, a company that's changing how we build cars. Or give your money to Google or Amazon, companies that continually create products that increasingly hold the data that we all depend on. Dropbox is an ideal candidate for an IPO - an established business with customers who pay for their services directly, and who continue to expand into other markets (B2B) as they become a more mature business. Uber is another company that has reached such critical mass and has such a large customer base with potential to move into other markets that they also will do incredibly well at an IPO.

Let's move away from putting our money into companies that rely on us visiting their webpages, to survive. Real intellectual property is created when a company builds something better and more unique than anybody else.

I wish companies like Twitter, Groupon and Yelp stayed private. These companies are immensely useful for a large audience, but when those growth numbers wear off, they shouldn't be penalized by investors who don't understand their value. Instead, they should stay private until the point where they are such a critical part of our lives where growth metrics don't matter, and instead, we value them upon their contribution to our lives.