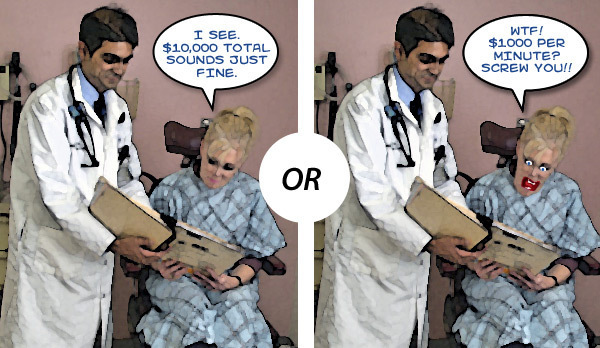 Having been back in the freelance world for a while now, I once again have to deal with quoting my clients an hourly rate for long-term contract work on an ongoing basis. I've been able to raise my rate several times in recent years, and now it's to the point where most people balk when I give them the figure.

But in reality, the amount of work I can do in an hour is the equivelant to what might take a less experienced person twice as long (or longer). In addition, more experienced people can cut down on potential revision time and avoid costly problems in the future by utilizing the knowledge they've built up of their work. And in general, if you've performed the same skill for a while, you're going to have all the tools you need and be much more comfortable doing it. So one hour of my time can easily be equivelant to four hours of a less experienced person's time.

Unfortunately the average client doesn't see it like this. They just see a high number and look to the next person. That's why hourly rates are hard to use, especially on long-term, open-ended contracts.

A designer named Clay Butler wrote about this problem. He also points out that hourly rates actually punish good designers:

Another problem with charging by the hour is that it punishes for getting get better and faster. To keep up with your increasing speed and skills your hourly fee must keep rising. With an hourly rate you can paint yourself into a corner because at a certain point an hourly rate will just sound ridiculous, where the same total fee, when presented as a flat fee, sounds reasonable because it focuses on value received and not the commodity (hours).

Clay Butler's opinion is that a flat fee works for both the contractor and the client. But rather than calling it a flat fee, he calls it a "value-based fee."

His suggestions are good, but I'm not so sure they work for me, given the fact I mostly do long-term contract work rather than one-off, short-term projects.

The challenge I face is to try to avoid the sticker shock that potential new clients might feel. The best clients understand the high rate and everything factored into it, but many others don't. So I don't know if I've found the solution for this problem yet. If you have a solution to this, I'd love to hear it.